As the sun shone brightly in Surrey last Thursday, graffiti and hip-hop artist Danny Fernandez took advantage, making serious headway on a mural he was painting in Newton.

“This project has been about a year in the making,” he said. “The idea was to create something to enhance the area, with a bit of the history of what’s going on in Newton.

“This is the old (interurban) train,” he explained, pointing to the far left of the mural, “so it’s kind of like this idea of the progression of Newton. This is all black and white. ”

Looking further to the right of the mural, painted on the side of a business complex on 72nd Avenue, are large letters that spell out “NEWTON,” with each letter’s content showing off part of the community’s story.

“I wanted it to include things from Newton, the Vaisakhi festival, the Wave Pool, and the evolution of the new (LRT) train would be the rapid transit.

“The final piece is the night-sky shot of a modern building,” he added. “It’s kind of old to new.”

When the Now-Leader met up with him last Thursday, Fernandez had already put about 40 hours into the project over five days, and expected to wrap up by Saturday (May 6).

“The people who work in this area have been so nice,” he said. “Everything from bringing me food, and there’s just been a wide variety of people from all walks of life that have come by and it’s been such positive feedback. Some people hang out for a couple hours and talk. There have been people who’ve offered to help, even.”

Fernandez, known as Def3 in the art world, has done murals all over the world, but is perhaps best known for his graffiti tribute to Robin Williams in Denver, Colorado. 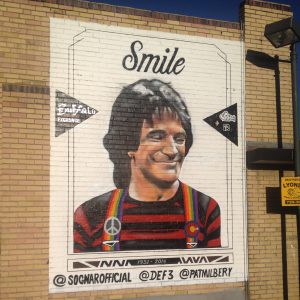 Completed shortly after the famous comedian’s death in 2014, it garnered attention all over the United States.

“It was something I just did on the street,” said Fernandez. “It was a picture that said, ‘Smile,’ and it has a picture of him smiling. There was so much press from it, that it’s gotten me tons of jobs all over the U.S.”

I’ve been doing it for almost 20 years and doing commission jobs for the last 10 years but that was something that was a good notch on the resume.”

Back in Surrey, Newton BIA director Philip Aguirre explains the business group commissioned the mural and said it’s “one of a thousand” planned to improve the area.

“One of the Newton BIA’s pillars is area enhancement and that includes beautifying the area. By putting in more murals we can activate spaces and make it more inviting for the community to come into,” he said.

Aguirre said the longterm vision for the mural is to “activate the entire alleyway” and “have an art festival in the street where we can bring people into a grittier area of Newton and showcase that there is life here.”

Newton’s history – and future – is captured in the art project, Aguirre continued. “The interurban was why Newton was created and in 1982 when the Wave Pool was constructed, it was the draw for the entire Lower Mainland. My inlaws used to come from North Vancouver to the wave pool.

“Then Vaisakhi and the diversification of Newton. Newton’s a great example of what Canada is about,” added Aguirre. “We can showcase that on the mural as well. And the progression of where we’re going tomorrow, with the cornerstone of the revitalization with Light Rapid Transit and the buildings and the commerce that will go with that.”

Aguirre said the project was made possible with roughly $12,000 in combined funding from the Newton BIA and the City of Surrey, with support from landlord Value Properties.

“It’s our stereotypical welcome sign,” Aguirre said, noting the mural is partially visible when driving down King George Boulevard, looking east down 72nd Avenue. “We wanted to say this is Newton.”

“It’s cool to be involved,” remarked Fernandez. “It’s awesome to see that Newton supports this type of art.”

A mural of Newton's history and future

We met up with Newton Business Improvement Association director Philip this afternoon to check out a mural that's being painted near 72nd Avenue and King George.

Very cool! The artist (Adapt Murals) is there all afternoon if you want to check it out.

Posted by Surrey Now-Leader Newspaper on Thursday, May 4, 2017

UPDATE: Barricaded Surrey man taken into custody with nobody injured

SURREY NOW & THEN: 4,000 skaters once filled frozen ‘Fry’s Corner’ for one panoramic photo