With such a cool name, Nate Money has some explaining to do.

“It’s a real name,” Money insisted with laugh and a smile. “People think I’m just trying to be cool.”

On a slightly cool Friday night, Money is busy running the clock at a basketball gym in Surrey. The court at Newton’s St. Bernadette Catholic school is where the Roundball league has flourished with some top-end hoops talent, and the Toronto transplant leads the effort to make it all happen.

“A lot of these players are former high school and college players who’ve come back to Surrey and are looking to play again,” Money said as players dribbled and dunked on the court. “We’ve always been kind of a home base for those players, who go overseas, go to college, come back and now they’re playing men’s league.”

In a fast-paced Surrey Elite division game between the Goon Squad and Timberwolves, the players include Parm Bains, Ravi Athwal, Manny Dulay and Riley Barker, all former stars at Surrey-area schools who later enjoyed success in college basketball.

Kyle Grewal, a two-time RCMP Classic tournament all-star with the Enver Creek school team in the mid-2000s, completed his law degree, lived in Australia for a time and has now moved back to the Surrey area.

“It’s super competitive, and the environment is great,” Grewal raved about the Roundball league. “Quite often there’s fans there watching, and it feels like a high school game or something. The league is getting a bit of a following.”

COVID stalled the league for a time, of course, but games were scheduled again over the summer, and the action has continued into the fall months.

“Nate does the rankings, all the stats, to make players feel like they’re part of something,” Grewal explained. “Every game, highlights are posted on YouTube, and that’s a lot of work. We had a four-overtime game recently, and normally the highlights are three or four minutes, but that one was 11 minutes,” he added with a laugh.

Online at roundball.ca, Roundball is described “a competitive basketball organization that facilitates men’s and women’s basketball leagues across British Columbia. We facilitate leagues that bring forth the all around basketball experience for athletes in our community. Our leagues bridge the gap between street basketball and the organized competitive system.”

The pandemic has been tough on everyone, Money said, including the Surrey- area basketball community.

“But we’ve bounced back here,” he noted. “Despite what people have said about basketball, sports, not being an essential service, I really believe sports is essential, because I heard so many stories of peoples’ mental health and how (the pandemic) impacted them, not being able to play sports. And so many of these guys were that.

“So when we had our re-opening night, where we got to play games again after nearly a year and a half, it was really special,” Money continued. “The atmosphere, guys were just so grateful to be here, and since that moment I think the guys really understand what basketball and community and team spirit means to them.”

Roundball league games are played in Surrey, Burnaby, Vancouver and New Westminster, and a co-ed league is also set up in Burnaby with the help of league organizer Maryam Parwani.

“There aren’t many leagues that aren’t capitalist-driven and just driven by making money, but this is one,” Parwani said, noting league fees of $135.

At the “St. B’s” school gym in Newton, a white cross is positioned in a round window high above the basketball court.

Asked about any church connections for the league, Money said “my faith in Christ is my motivation, using basketball as a tool to impact community, to help young people transitioning into adulthood and bring them alongside our team.

“We get together and do give-back initiatives,” continued Money, a youth worker, “so outside of the league itself, together with Help Change My City Alliance we spent, like, a year of COVID with some of our funds going to give protein packs to lower-income communities, people. One of our mantras is, bigger than basketball. We preach that everything we do is bigger than basketball. It’s not just a league, it’s just a vehicle. And because we love it so much, we know what it does, right. 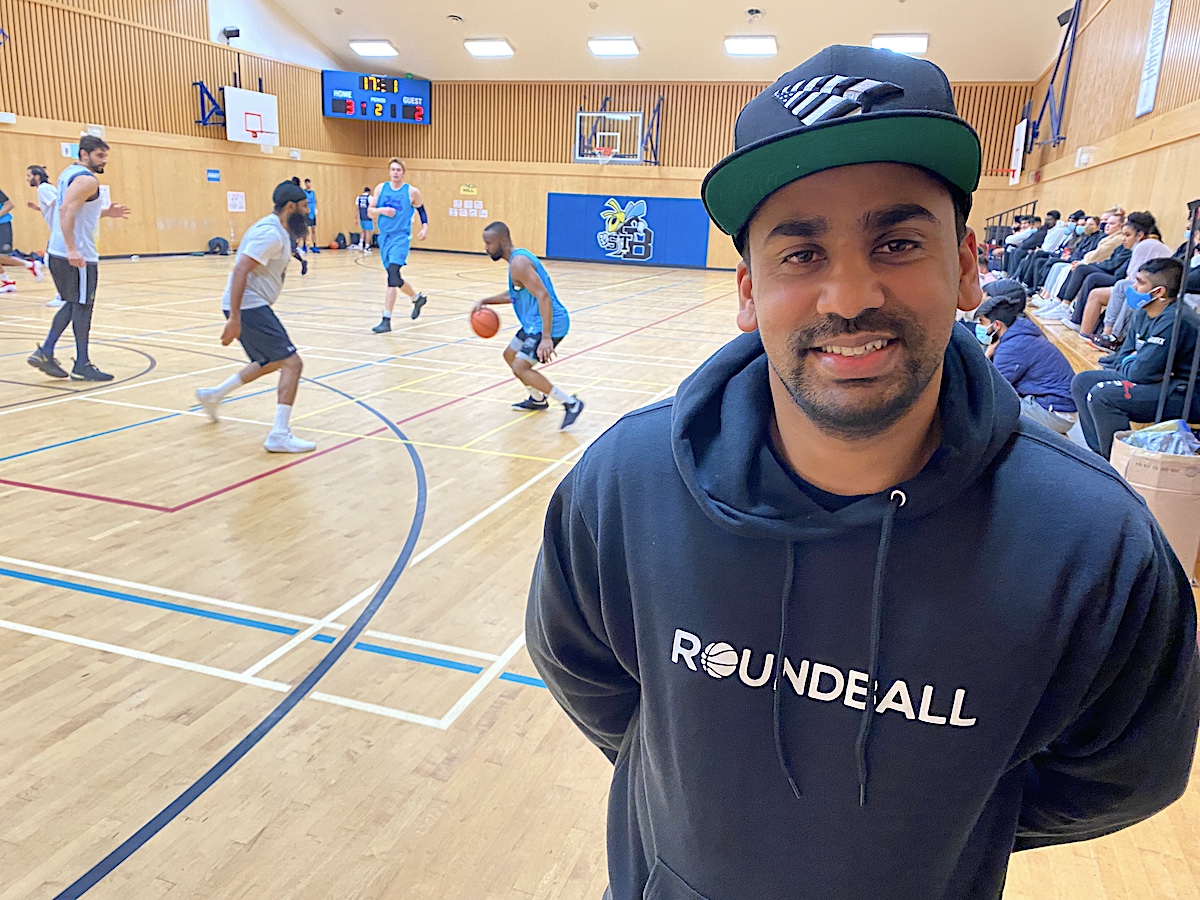 “I was drawn to Nate and saw how he impacted the community and wanted something more than just basketball,” Crawford said. “I’m going to school to be a coach and I just wanted to find something in line with that, and this is perfect. It’s a match made in heaven, to be honest. I’m playing and also working here, giving back as well, doing as much as I can.”

Crawford’s team is called The Kings Guard, who have a couple of victories this fall, along with six losses.

“At the end of the day it’s not about getting the wins, it’s making friends, and I’ve built a lot of friendships here,” Crawford said.

Still, there are those stats, video highlights and league standings.

“It’s a full basketball experience for the everyday baller, and we try to make it a pro-like experience,” Money added.

“We have a big vision and we’re not where we want to be yet.”