It’s a big job to move all the stuff out of Surrey Little Theatre, now that the long-established company has amalgamated with Langley Players Drama Club and aims to stage plays in the renovated Playhouse there.

The Clayton-area theatre building has sold for close to $900,000, and all the costumes, props, set pieces and more must go before month’s end.

“We’ve been in here more than 50 years doing three or four shows a year, so that’s a lot of shows,” noted Sara Lohnes, Surrey Little Theatre’s president in recent years.

“Right now we’re just working to clean out the building, sort through all the stuff and bring some of it to Langley. You know, we have 17 of everything, so it’s going through everything and ending up with 10 total, type of thing,” she added with a laugh. “We have amazing, dedicated volunteers who’ve been here working over the past month and a half.”

Eight kilometres away in Brookswood, at 4307 200th Street, plans are drawn to renovate and upgrade the rechristened Langley Little Theatre before any plays are staged there, spring 2022 targeted.

It’s not publicly clear who bought Surrey Little Theatre’s building and land (for nearly $300,000 less than the asking price), or what their plans are for the structure; the realtor hasn’t returned calls.

What’s clear is this: The building must be moved, even just a few metres, to make way for the eventual widening of 184th Street, amid development pressures in an area that has changed dramatically over the years.

During 2018 financial plan discussions, the City of Surrey earmarked $500,000 for the relocation of Surrey Little Theatre, in 2023. 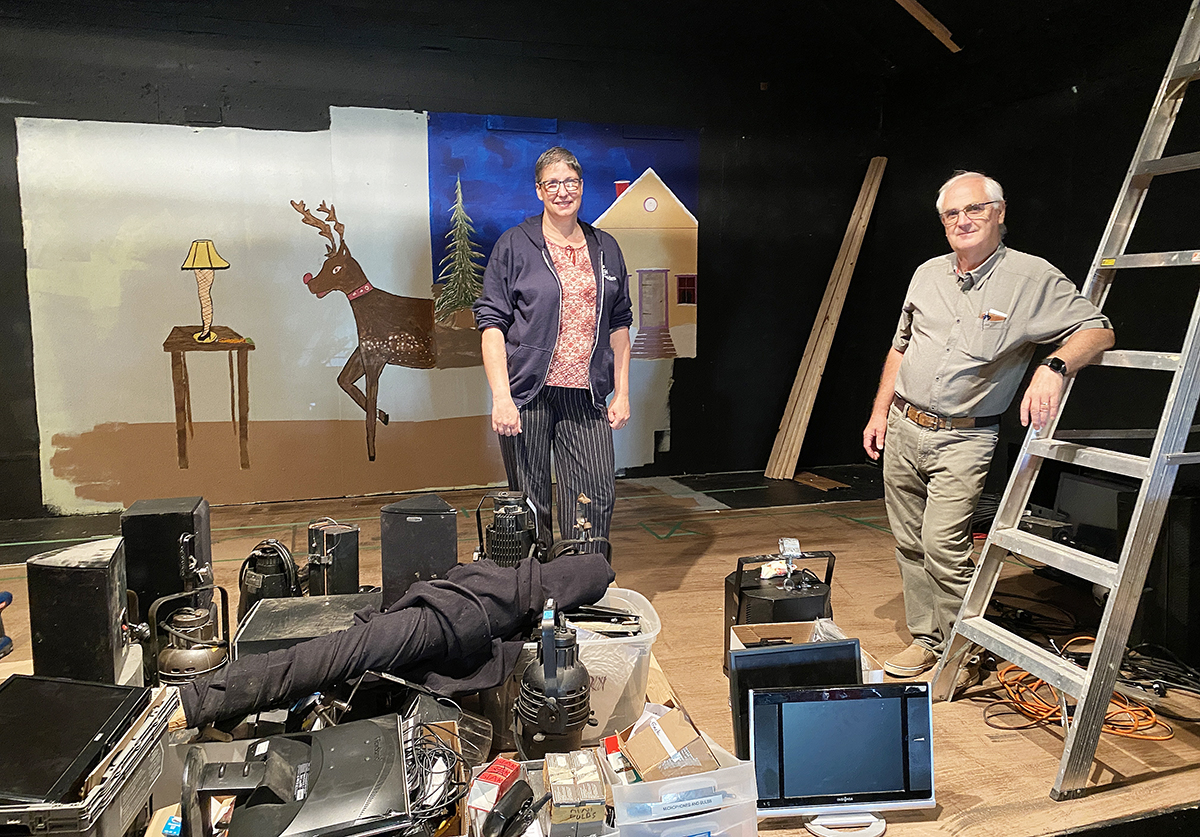 PICTURED: Theatre company administrators Sara Lohnes and Dave Williams on the stage at Surrey Little Theatre, which has been sold as part of an amalgamation between the Surrey-based organization and Langley Players Drama Club. (Photo: Tom Zillich)

Built in 1936 and listed on Surrey’s Heritage Register since 1998, the old Clayton United Church building has been home to Surrey Little Theatre productions since the late-1960s, on that increasingly busy corner of 184th Street and Fraser Highway.

“A number of alterations have been made to the building, but the church remains important to the community memory of the West Clayton neighbourhood,” notes an area heritage study done in 2011.

The 2,904-square-foot structure and property was listed for $1,188,000 on May 4, and a buyer was quickly found. “This is a fantastic opportunity to purchase a property right next to the future SkyTrain station at 184th and Fraser Hwy,” said a post on remax.ca. “The OCP designates this property as Commercial giving this property future development potential.”

Lohnes said the theatre company doesn’t know what is planned for the building and land.

“A developer has bought it, that’s all we know,” she told the Now-Leader. “It’s on the city’s heritage list but it’s not protected – there’s no bylaw or ruling that protects it.

“The price isn’t as much as we wanted,” she added. “We had some churches interested in the property, but the zoning won’t allow it, and the city won’t allow it to be rezoned because of the neighbourhood’s official community plan in place for the development around there. So we ended up having to sell it just for the land – in the high 800s.”

With Langley Little Theatre, Lohnes will be vice-president of the new company, with Dave Williams, president. Both have been involved with their respective theatre groups for many years.

“It’s a 110-year history between the two companies,” Lohnes said.

“We were constantly competing for people, actors and crew, and a lot of our members have done productions with both companies over the years,” Williams noted.

“The timing for all of this has been really good, with our theatres shut down (due to the pandemic),” Lohnes added. “We were able to work on all of this behind the scenes, with Zoom meetings of members, voting.”

Amalgamation talks began last spring, just as COVID-19 hit, and just a couple of months after The Late Christopher Bean ended up being the final play staged in Surrey Little Theatre history, in January/February 2020. Topher Payne’s Perfect Arrangement was the company’s spring show that year, but the pandemic cancelled those plans. 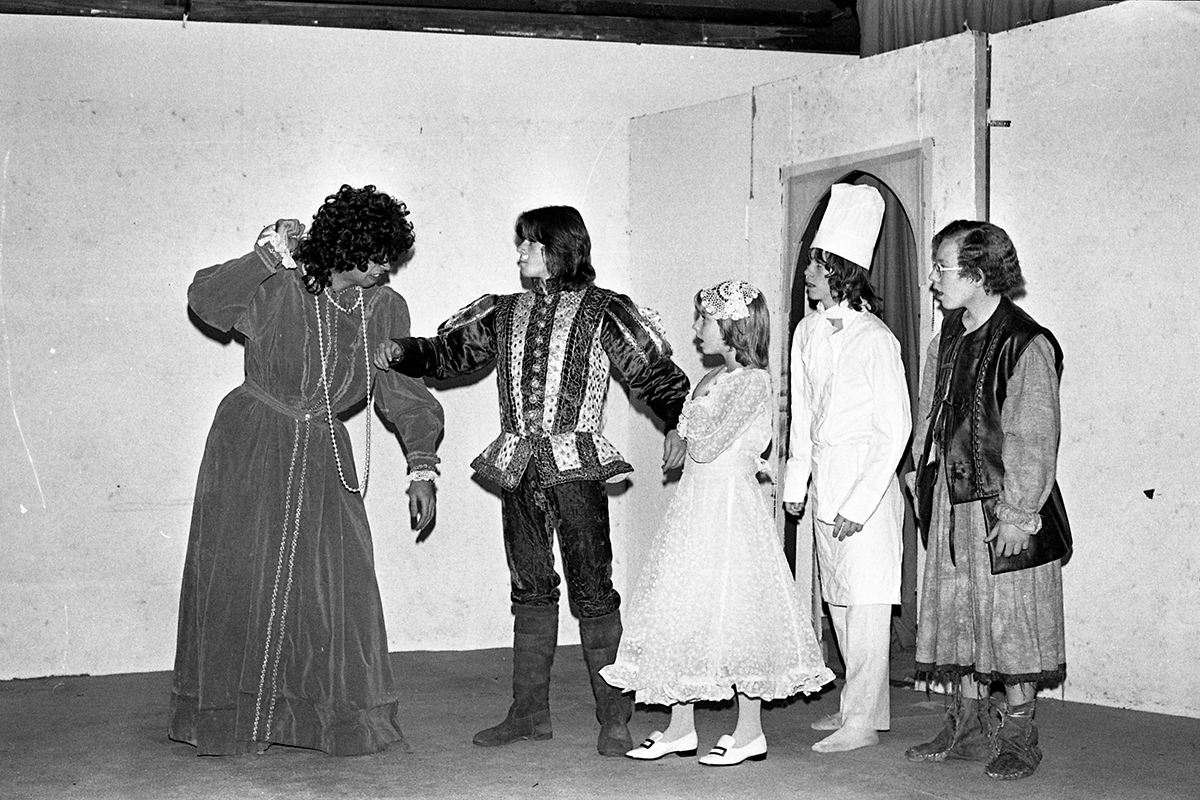 Drawings of the planned renovations show a second level for the theatre.

“What we’ve planned is a pretty large rehearsal space,” Williams explained, “and hopefully we’ll be running a youth program out of that, one that will transfer from Surrey to Langley. Hopefully it will all be fully teched with sound and lights, so we can mentor youth in there, without interfering with the current show, with workshops. The plans are still on the drawing board right now.”

Of note, the re-branded “little theatre” will remain true to its name, with around 80 seats in the “house,” located a 12-minute drive from Surrey Little Theatre, east on Fraser Highway to 200th Street, and south from there.

“We’re hoping to do musicals and bigger productions, but the number of seats won’t change,” Lohnes said. “It’s really important to us in community theatre to maintain that intimacy.

“What’s really neat about smaller theatres,” Williams added, “is that the worst seats are on par with the best seats in a large theatre. The audience member is drawn in that way, and the energy that feeds to the actors from that, it’s really critical. It’s almost an electric connection.”

At Surrey Little Theatre, a “work bee” was held June 5 to clear out the building, with more work to come.

“We had a hospital bed here, which is awkward to store but it’s so hard to get when you need one (for a play), and things like an IV pole, you know,” Lohnes said.

“Like, we borrowed the hospital bed for a show,” Williams added, “and our old radio we have, it came here for a show. So there’s this borrowing that goes on among the community theatre groups. We have to share those resources.”

It was a nice day June 5, which had its benefits.

“We ended up putting some things on the grass for people to take – chairs, tables, props – for free, just to clear it out, wardrobes, just come and take it,” Lohnes recalled. “One woman stopped with her husband and said she’d seen shows here and would miss the theatre so much, so she grabbed a chair, stuck in the grass and had her husband take her photo in front of the sign behind her, as a farewell. So we heard stories of people seeing shows here 20, 30 years ago, and their kids were in a show once, that kind of thing.”

Later this month, a “goodbye” event is planned at the former Surrey Little Theatre on Saturday, June 27.

Said Lohnes: “It’s just a chance for people to come here, have a look around, say goodbye, share some stories. People have a lot of stories about the plays here.”

Surrey Little Theatre’s history began in June 1958 when the Greater Whalley Recreation Council sponsored a little theatre group, the North Surrey Thespians, according to a post on surreylittletheatre.com.

“The first meetings began in the basement of the Dell Hotel and a society was formed in early 1959.

“For a few years several one act plays were presented at local high schools. In November 1962 the group produced their first full length three act play and in December of that year changed their name to Surrey Little Theatre.

“In 1967 Surrey Little Theatre purchased the former Clayton United Church. The first production was Dirty Works at the Crossroads and then was also the last one for a few years as the building was declared non-conforming to public showings. Due to the contributions of dedicated leaders and a grant, the building was renovated and productions were re-established by 1973.

“Today Surrey Little Theatre thrives not just as a historic landmark, but as an award winning theatre group producing quality entertainment and opportunities for youth for the surrounding community.”

Surrey Now & Then is a look back at Surrey-area landmark sites, events and people. Email story ideas and tips to tom.zillich@surreynowleader.com. We thank Surrey Archives for assistance with this series.

NDP calls on Ottawa to recognize residential schools as genocide