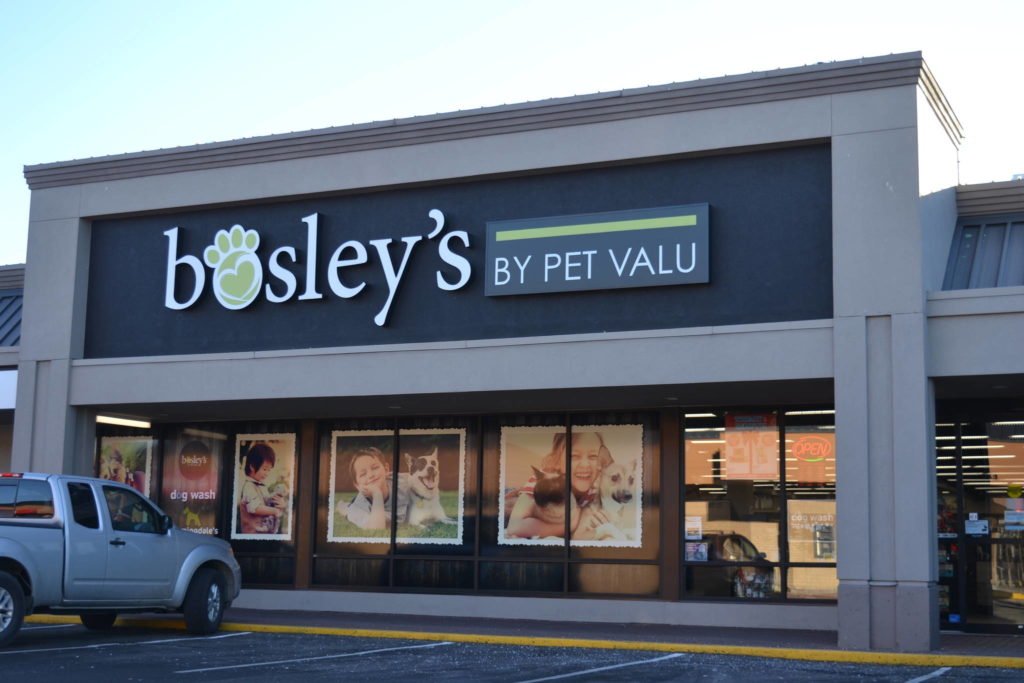 Alex Browne photo A variance permit granted by White Rock council to the Bosley’s pet supply store at Central Plaza – to allow signage that exceeds the maximum dimensions permitted in the current city bylaw – has helped prompt an overall council re-examination of bylaws.

In what might seem like much ado over selling pet supplies, White Rock council has approved a development variance permit to retroactively allow out-sized sign lettering on the Bosley’s by Pet Valu retail store at Central Plaza.

But Mayor Darryl Walker said the issue makes it clear time is fast approaching when city bylaws in general should be reviewed.

His comments followed discussion during and after a public meeting on the variance on Dec. 3, in which both residents and councillors said the city should either be enforcing its bylaws or changing them.

When Bosley’s installed its sign at the premises – at 15176 North Bluff Rd. – earlier this year, the lettering on the sign facing North Bluff Road was 1.07 metres (3.5 feet), over the maximum .61m (two feet) allowed by the city’s sign bylaw.

Staff recommended council approve a variance as the best way of dealing with the issue.

But, speaking during the public meeting, Ken Jones – a former city councillor and MLA – said it raised a matter of principle.

“It’s primarily an issue of whether our bylaws are going to be enforced or not,” Jones said, noting he had no other concerns with what he termed “a reputable company in the community.”

“We should not be doing variances – we should actually fix the bylaw if it’s not suitable. If it’s found to be suitable, then we should enforce it and we should not expect people to be able to keep coming back to council with their ways of getting around the bylaws – we need respect for our bylaws.”

Mike Hornak, speaking in favour of the permit, said he believed the variance application process is in place to deal with anomalies such as the Bosley’s sign.

“If you so choose, down the road, to change the bylaws to reflect something different, I’ll leave that completely up to you.”

In subsequent discussion of granting the permit, Coun. Anthony Manning noted that the applicants “were able to get the dimensions right on the (Johnston Road) side, but they weren’t able to do it on the parking lot side.”

“It seems like this whole situation is that it’s easier to beg for forgiveness than ask for permission, and I don’t really appreciate staff having to jump through this hoop to get it done for them,” he said. “I do think that we need to enforce our bylaws, but also…we need to be looking at changing our bylaws so that we’re not doing this all the time.”

“I believe the bylaws are there for a reason, and need to be respected, just like the OCP,” she said, while noting that she didn’t have a particular concern with the extra size of the sign.

“The applicant knew what the bylaw was, was told by staff, is my understanding, and chose to go ahead and put both up and wait for a variance – that’s what disturbs me the most.”

Walker stated that council “will be reviewing the bylaws of the city.”

“Some of them, I’m led to believe, may be quite old. Often bylaws are left to collect dust, and, where they worked 10 years ago, they’re not even efficient or effective now… I think we need to look at our bylaws. Having said that, common sense tells me this is a sign that’s up on one of the businesses in our community… let’s go along with this and decide what we need to do next.”

Council approved the variance permit, with both Manning and Johanson opposed.

The Queen offers wishes for peace in annual Christmas speech